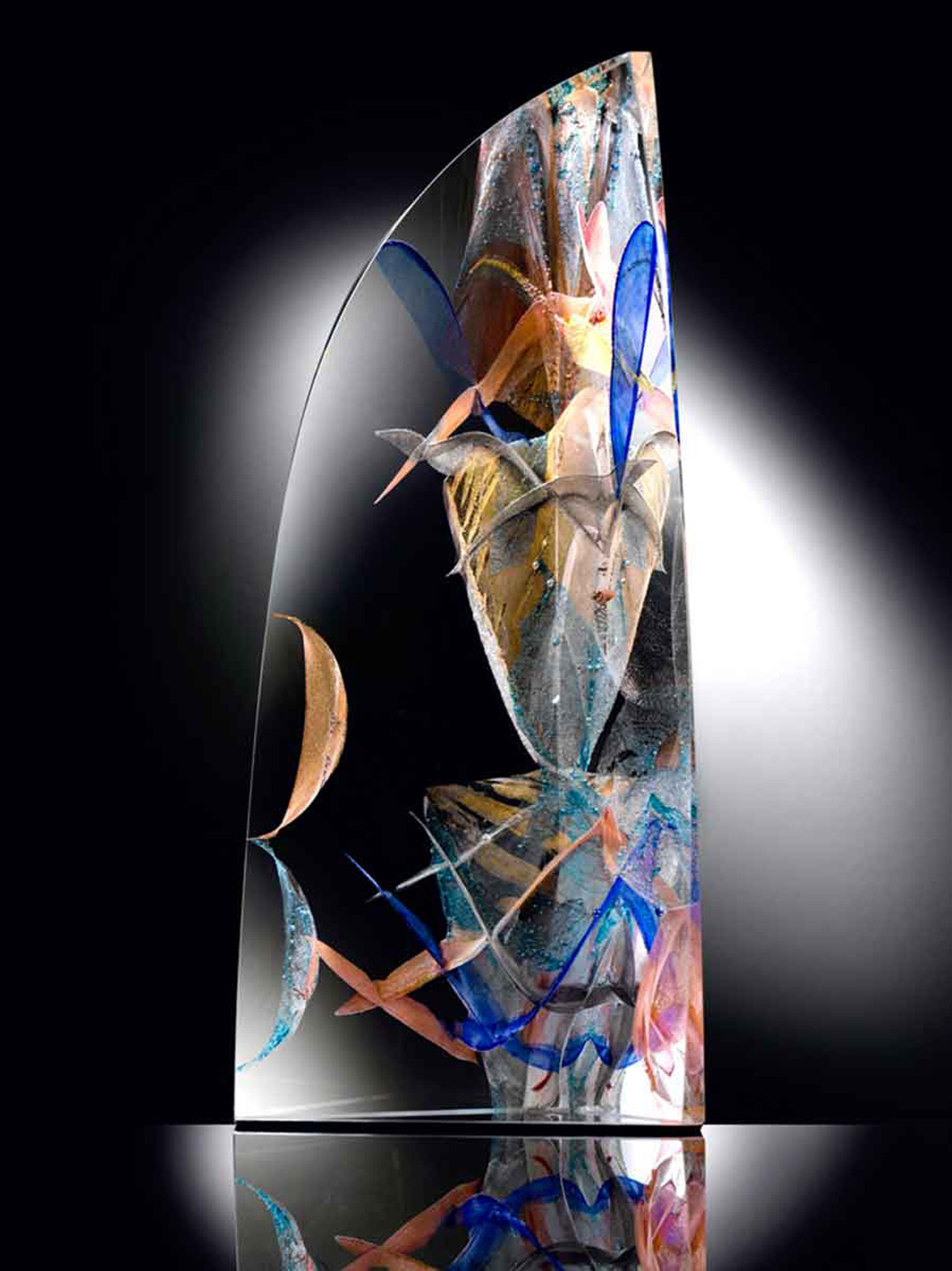 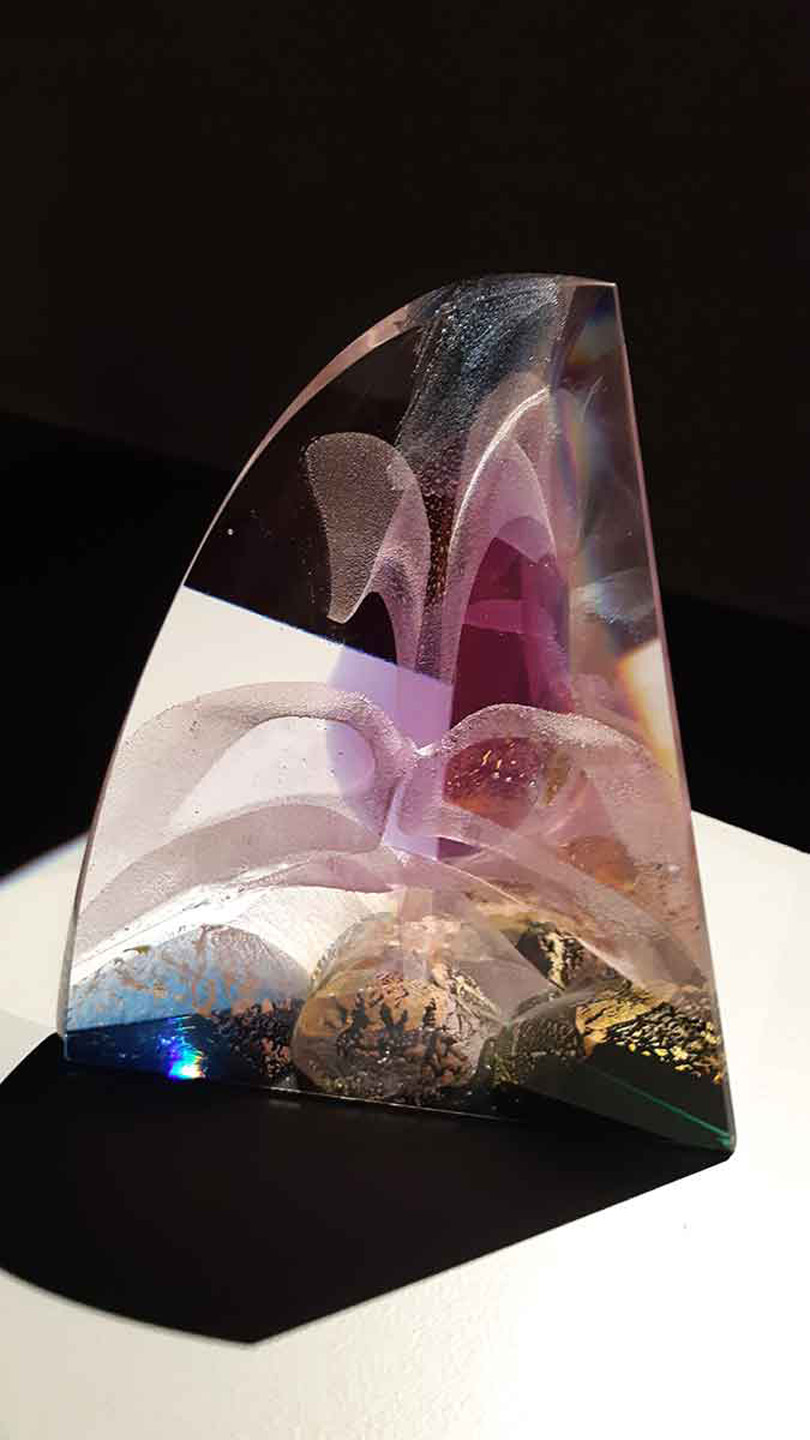 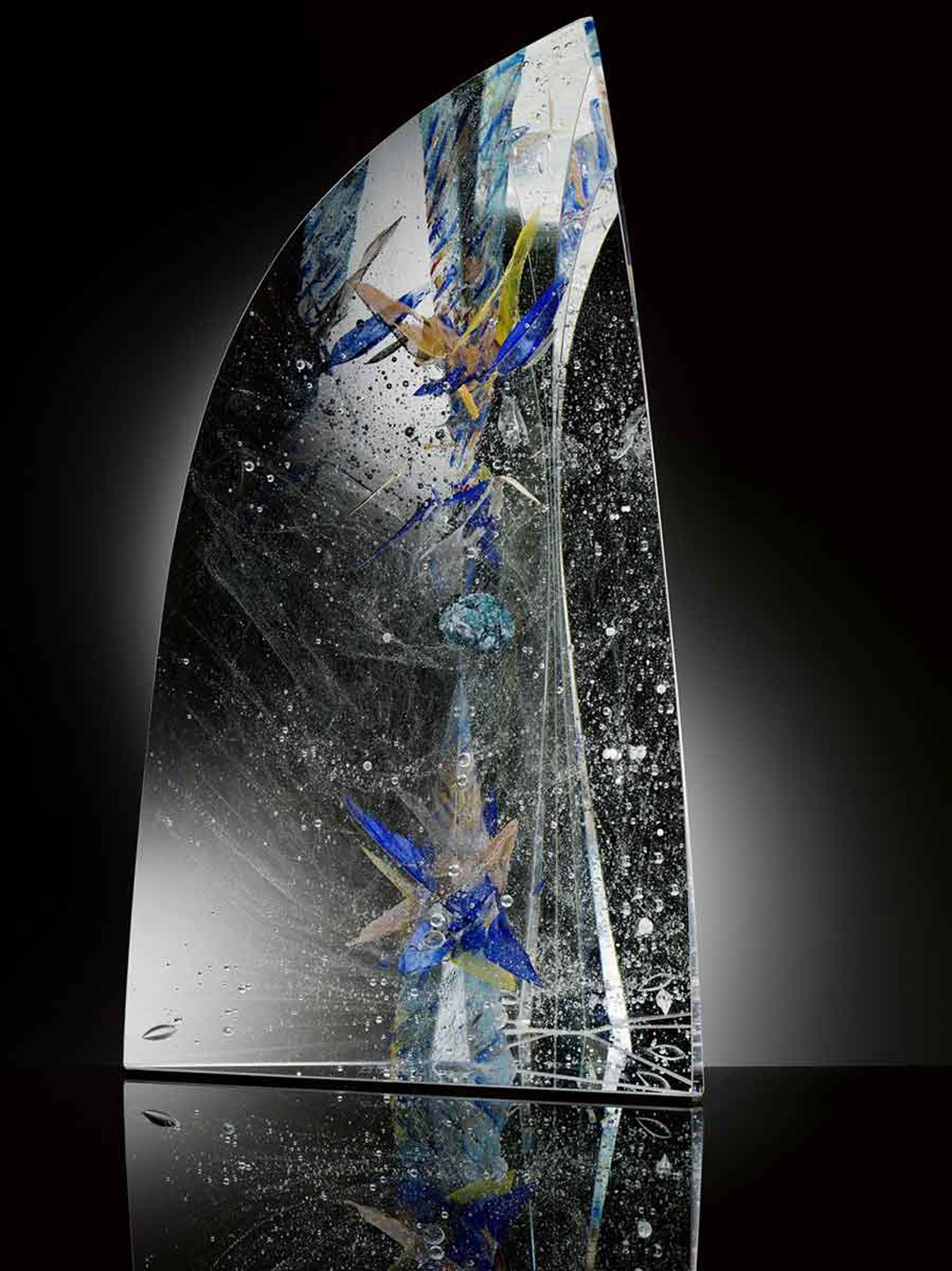 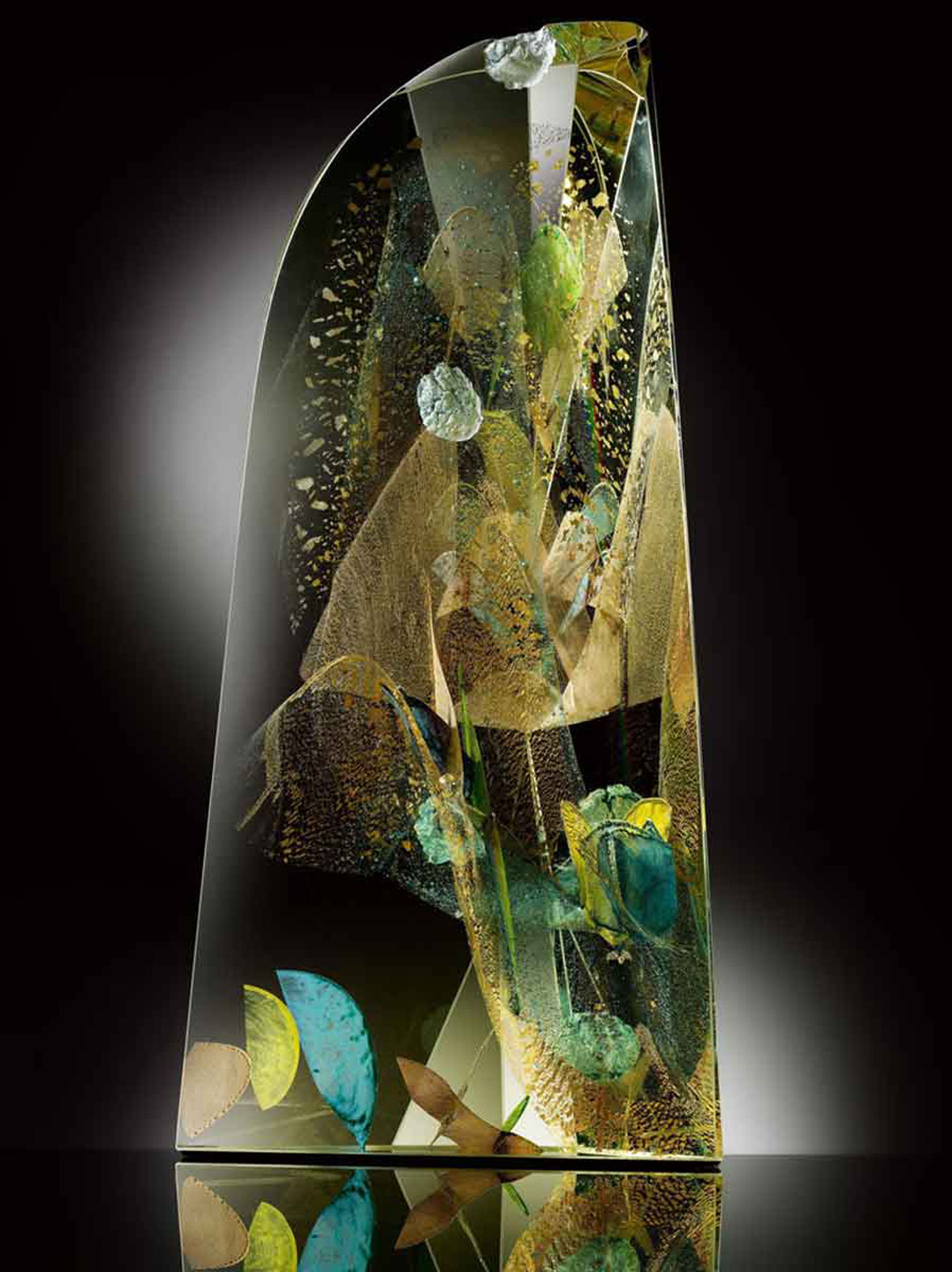 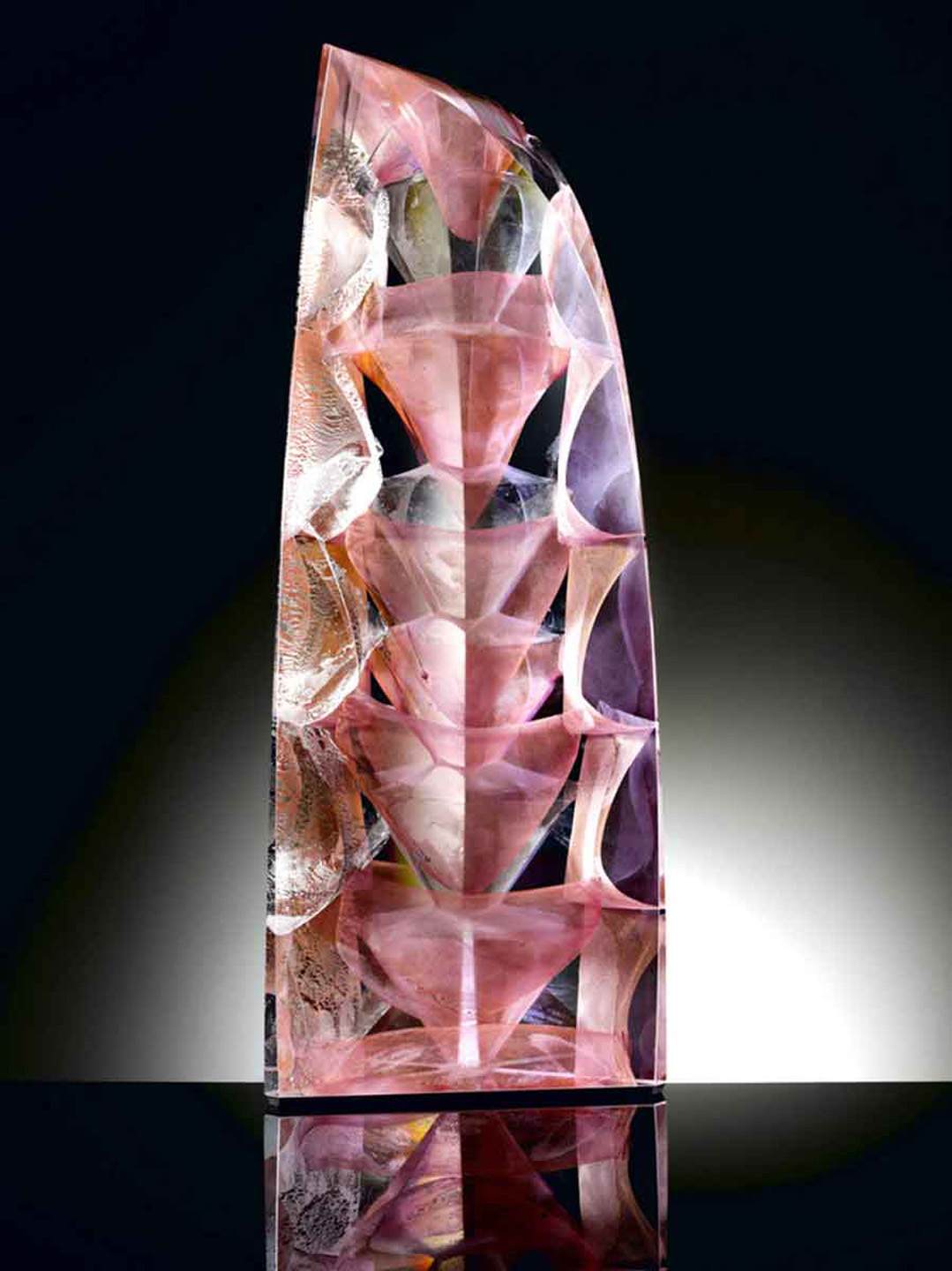 He is one of the most important creators of European glass art. Born in Slovakia, he learned the basics of the trade at the Secondary Vocational School of Glassmaking in Železný Brod and the Academy of Arts, Architecture and Design in Prague (UMPRUM) with the support of world-renowned teaching artist such as Stanislav Libenský. Since the 1970s he has lived in the small town of Talloires in the French Alps, he is the creator and defining representative of contemporary French glass sculpting, and his activities as an organiser of education and institutions are also significant internationally. He took part in the creation of the now world-famous contemporary French glass museum and centre, the Musée du verre de Sars-Poteries, CIRVA (Le Center international de recherche sur le verre et les arts plastiques) in Marseille; and he also helped organise glass art courses at the universities of Quebec and Montreal. And he founded the Stone Art contemporary art gallery in his hometown of Ždiar. In 1987 he received the title of Knight of the Order of the Arts and the Letters in France. An eternal experimenter, he has also used the special glass used in CERN, the world’s largest particle physics laboratory, for his work. In his mainly optic glass-based sculptures, formed with clean silhouettes, he artistically models galactic and geological processes with the help of various materials and methods. His famous cycles include Space Messengers, Constellations, Space Bouquets, Stars, Space Gardens, Big Bang and the Polar Flower of the Arctic and Antarctic.

We use cookies on our website to give you the most relevant experience by remembering your preferences and repeat visits. By clicking “Accept”, you consent to the use of ALL the cookies. / Sütiket használunk a weboldalunkon, amik gazagabbá teszik a felhasználói élményt. Az "Elfogadás" gomb megnyomásával hozzájárul minden süti használatához.
Do not sell my personal information.
Cookie SettingsAccept
Manage consent

This website uses cookies to improve your experience while you navigate through the website. Out of these, the cookies that are categorized as necessary are stored on your browser as they are essential for the working of basic functionalities of the website. We also use third-party cookies that help us analyze and understand how you use this website. These cookies will be stored in your browser only with your consent. You also have the option to opt-out of these cookies. But opting out of some of these cookies may affect your browsing experience.

Ez a weboldal sütiket használ a felhasználói élmény javítása érdekében. Alapvető funkciókat érhet el ezek közül azokkal, amelyeket a böngészője tárol. A harmadik félhez kötődő sütik által segít nekünk a felhasználói élmény fejlesztésében. Ezeket a sütiket engedélyével tárolja böngészője. Viszont kikapcsolhatja a sütik tárolását. De ha kikapcsolja, az befolyásolhatja a felhasználói élményt.
Necessary Always Enabled
Necessary cookies are absolutely essential for the website to function properly. These cookies ensure basic functionalities and security features of the website, anonymously.
Functional
Functional cookies help to perform certain functionalities like sharing the content of the website on social media platforms, collect feedbacks, and other third-party features.
Performance
Performance cookies are used to understand and analyze the key performance indexes of the website which helps in delivering a better user experience for the visitors.
Analytics
Analytical cookies are used to understand how visitors interact with the website. These cookies help provide information on metrics the number of visitors, bounce rate, traffic source, etc.
Advertisement
Advertisement cookies are used to provide visitors with relevant ads and marketing campaigns. These cookies track visitors across websites and collect information to provide customized ads.
Others
Other uncategorized cookies are those that are being analyzed and have not been classified into a category as yet.
SAVE & ACCEPT