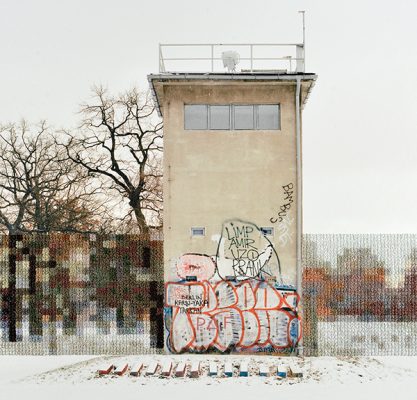 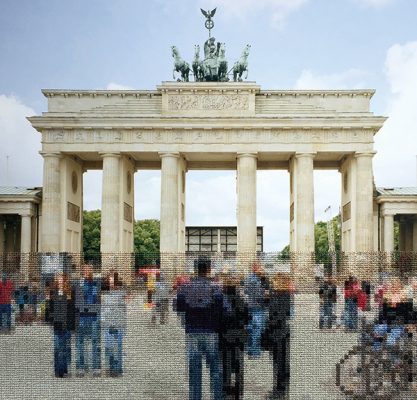 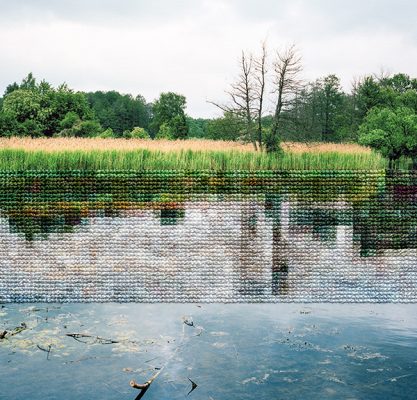 This expanding series features photos where the “landscape” is dominated by the former Berlin Wall. The project fits well into Meyer’s artistic praxis; she is fundamentally interested in the physical, sociological and psychological aspects that shape the character and spirit of a location. In her works she uses an analogue technique which she combines with the visual language and toolset typical for digital imaging. In the colour photos of the Berlin series one can see blurred and pixelated bands created using hand-embroidered cross-stitch that signify the former location of the Wall. Most of the photos show the central city districts, where the path of the former structure that divided the city for almost three decades can clearly be traced. There are also many photos, shot in the suburbs or the typical forested areas surrounding Berlin, where one can only find subtle traces or barely-visible clues.

The gesture of embroidery is a radical intervention, used primarily to highlight the unnaturalness of the Wall. The obscured, blurry sections make the landscape translucent, invoking something that is no longer there but to this day occupies an important place in individual and collective memory. „I was curious to see what lasting tangible effects the Wall still has – even though it was torn down decades ago. Memories and photos turn history into a nostalgic object; but how much do they influence our objective judgement of the past?”